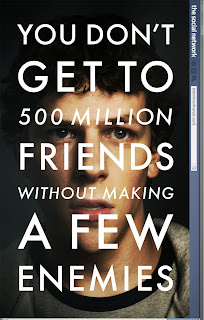 Watched “The Social Network” last night and LOVED it totally. No, no its not because of my addiction to Facebook :), this movie is actually a very well made movie. Engrossing from the start, entertaining throughout & enthralling till the end. Now what else can you expect from a movie?
As we all know the movie is an adaptation of Ben Mezrich’s non-fiction book ‘The Accidental Billionaires’ and the story is all about the social networking giant Facebook. Even though all the reel names of characters are exactly similar to the real ones, there have been numerous reports on Zuckerberg denying the factual authenticity of the movie. Zuckerberg has called it a “work of fiction” and the portrayal of the negativity around the success of Facebook in this movie is not a matter of concern for him. So, I won’t go into the debate of how much fact vs. fiction this movie was. I evaluated this movie as a standalone plot for a movie and I must say that the movie is thrilling to the core. What an excellent execution and what a plot; one really can make a thriller out of a nerdy topic like tech product development! Clever dialogues, funny quips, smart story-telling and a very smart end. The movie beautifully portrays the journey of an intelligent developer who takes the path of entrepreneurship and on his way goes through different lessons of friendships, jealousy, insecurities, trust, mistrust & betrayal. There was a time in the movie when Eduardo confronts Mark after he comes to know the game played on him for his share in the company. That particular scene really left me thinking about the cost of success which at times few people have to pay to make it to the top. Kudos to the screenplay, direction, music and acting delivered by the whole team. A must watch for those who want to see an intelligent yet dramatic movie.

Do check out these links in case you’re interested to know the reel vs. real characters and the fact vs. fiction of the movie.