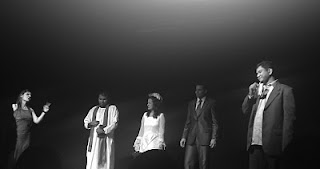 Finally I got to watch a performance by long time blogger friend – Nautankey. Earlier when he used to write about his shows at different places, I remember asking him about his plans to come to Bangalore. And so when his team decided to perform in Bangalore, I was definitely excited. Went to watch his play “Battle of Sexes” last Sunday and must say that my excitement was totally worth it. As the name suggests, it’s based on the differences between the two sexes from Venus & Mars. Loved the characters, theme and performance by all the actors of the show. Great work Naut & you were just too good as “Mo”. Keep it up & look forward to your next play in Bangalore soon 🙂

This was definitely a good weekend as far as entertainment was concerned, the same weekend I also got to watch the movie Guzaarish. I don’t think I can find suitable adjectives to express my reaction about Hrithik’s performance in this movie. It was a wonderful movie, made very beautifully. As much as I hated Sanjay Leela Bhansali’s Saawariya or Hrithik’s Kites, more and more I loved both of them for Guzaarish. A lively movie on a very disturbing topic, Guzaarish is the story of an accomplished magician Ethan Mascarenhas (Hrithik Roshan) who has become quadriplegic after an unfortunate accident. The movie revolves around the story of his life on a wheel chair, his relationship with his married nurse (Aishwarya Rai) and his decisions about the future course of his life. Though I found Aish’s get up in the movie bit overboard for a nurse kind of character but then overall she was good and Hrithik was just outstanding.!All other actors like Aditya Roy Kapoor, Suhel Seth, Nafisa Ali, Shernaz Patel or even a small appearance like that of Monikangana Dutta did an excellent job for their characters. It’s a must-must watch movie and don’t go by the critics ratings or negative reviews of the media. No idea on what basis they decide to give four stars to a crap like “All the Best” and two to an excellence like “Guzaarish”! Watch it and if you’re ok with bit of emotional heaviness, then I’m sure you will enjoy this movie.

And did I mention, how much I am in love with the songs of Guzaarish esp. “Sau gram zindagi”… ‘Der tak ubaali hai, cup mein daali hai, kadvi hai naseeb si, yeh coffee gaadhi kaali hai, sau gram zindagi ye, sambhaal ke kharchi hai’… must have listened to this song 50th time since morning and million times since I first heard it…love it, love it, just love it!