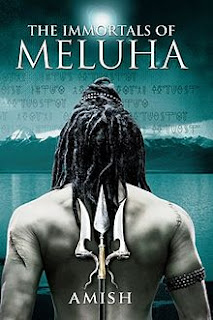 Don’t remember when was the last time I got so hooked on to any book that I took all-nighter efforts to finish a fiction series. Shiva Trilogy is indeed one of those which got glued me to it like crazy. And thank God, I did not read these two books separately. I had missed to read the first one when it was released. So, when there was buzz about ‘The Secrets of the Nagas’ getting released, that’s when I actually picked up ‘The Immortals of Meluha’. Otherwise had I read these two titles separately, can’t imagine the restlessness that I had to go through about ‘what happened to Sati’.
Set in 1900 BC, ‘The Immortals of Meluha’ is the first book of Shiva Trilogy series written by Amish Tripathi. What we modern Indians call the Indus Valley Civilization, the inhabitants of that period called it the land of Meluha a near perfect empire created many centuries earlier by Lord Ram, one of the greatest monarchs that ever lived. This once proud empire and its Suryavanshi rulers face severe perils as its primary river, the revered Saraswati, is slowly drying to extinction. They also face devastating terrorist attacks from the east, the land of the Chandravanshis. To make matters worse, the Chandravanshis appear to have allied with the Nagas, an ostracized and sinister race of deformed humans with astonishing martial skills! Amidst all this chaos, here appears a Tibetian immigrant who as per legends will be their savior, their God – the Neelkanth. But is this immigrant ‘SHIVA’ a normal human being prepared to handle the same? This book is the story of SHIVA, an ordinary man whose karma actually made him MAHADEV – God of Gods.
What I liked about the book:
What I didn’t like about the book:
Overall, a very interesting and must-must-must read book. It’s not in news unnecessarily; it deserves to be a bestseller. I will be back with my views on second book of this series in my next post. Till then, tell me did you read the book and did you like it?

Change is never easy but possible

While sitting by the window on this cold winter morning in...

Digital etiquettes during the state of emergency

At times like these, you wish social media was not this...

Spotted these Amazon Storyboxes at a mall recently and they instantly...

Gift yourself some silence

When everyone is busy putting up their year-end summary, next year’s...

Books Worth Your Time – Fiction

Hello, I hope you are having a good holiday season with...